you're reading...
Education in the Media, Leadership and Activism

You Want Ideas? We Have Ideas! 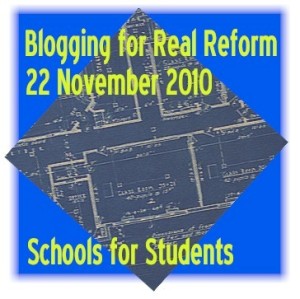 The Day of National Blogging for Real Education Reform was an outstanding success in many ways, and it continues beyond November 22.  While this post was originally set up to archive the links, some organization quickly became necessary.  The links are now mostly alphabetical by title, but a few have been brought forward–the reflections on the day and the response by Secretary Arne Duncan as well as responses to him.  Student voices are also near the top as they are our clients and why we are blogging for real reform. Thank you, students for participating!

An incredible appreciation goes to my superintendent and Ira Socol for devising this original idea on Twitter, to Tom Whitby for picking it up and running with it on October 17, 2010, to Eric MacKnight for archiving the first set of blogs, and to Becky Fisher for thinking up the hashtag, #blog4reform.

And, as always, thanks to the innumerable behind the scenes folks who have supported this day–the amazing, passionate, dedicated educators who give their all in the classrooms and to each other every day  in so many unrecognized ways. Co-op Catalyst writers get a special appreciative hug for all of their support of this post and their thoughtful and thought-provoking conversations!

Thanks, also, to the parents, community members and organizations who lent a hand and shared as well. Without you, we would have a much harder time.

Please continue to add your blog4reform links to the comments below and they will be added to this archive. As we have time, we’ll add the blog authors as Ira Socol has done on his list.

The Blog4Reform Daily our newspaper

Reform Revolution From The Ground Up Dave Britten

Revolutions Start With One Steven Anderson

What #Blog4Reform Did For Me Dave Meister

Duncan’s response to #blog4reform in wordle

Arne Duncan and The Blog For Reform Day Kari Dalane

Secretary Duncan: Here is What Divides Us Anthony Cody

Student Voices in response to: Should We be Good At School? Tony Baldisaro

3 Common Obstacles to Change—and How to Avoid Each Alan M. Blankstein

A Mission From The Heart Walt Sutterlin

A moment for education Garden337

A New Vision for Students in School Reform Adam Fletcher

A Teaching Degree Does Not Make a Teacher Mrs. Ripp

All This Talk of Reform is Making Me Cranky Deven Black

Are We Preparing Developers or Producers? Chad Ratliff

Education for Profit and Its Nexus with the DPVA Decision KathyinBlacksburg

Blogging for Real Reform Today: My Rants and Praises Shelley

Blowin’ the Roof Off

Don’t Be Stingy or, Forming a Grassroots Organization to Save Public Education Miss Shuganah

Drowning in shallow water”: How can we deepen literacy instruction? Corrie H. Kelly

Education Reform For The Future of our Children Stephanie

Education Reform is Re-establishing, Redefining and Retooling : 2¢ Worth David Warlick

Effective at What? Effective for Whom? Becky Fisher

ePortfolios Will Be Central to the New-Form Dan McGuire

Evolving as a Leader Kimberly Eggett

From Drift to Shift: Celebrating the Transformation of Education Walter McKenzie

Get Rid of the “Students as Widgets” Mentality Anne O’Brien

Go Beyond the Four Walls of the ClassroomMichael Thornton

Gowalla and the virtual geography of learning Chad Sansing

How can (I, you, we) work toward ed reform? Jeremy Lenzi

How to Effect Change Karen

If we were really serious about educational technology Scott McLeod

It is about Relationships, Stupid David Loitz

Loosen Up Your Hold On Classroom Management Lyn Hilt

Meet Me in the Middle David Britten

My Kind of Blended Adrianne Stone

My Vision for a Transformed Education Kristan Morrison

National Day of Blogging for Ed Reform: How Would I Change Education?

New Vision for Students in School

NO, #REFORM IS NOT “TRENDING” David Timony

One educational reform I would like to see Teacher Ken

One Model Does Not Fit All The Education Traveler

One parent’s story of one school Tamar Wyschograd

Reform Education: Get Rid of the “Students as Widgets” Mentality Anne O’Brien

Reform education – one classroom at a time Tyler Trice

Reform Your Perceptions of Geography and “Salvation” Gregory Hill

Reformers Without Chalk On Their Hands Mindsteps

School Funding and the Kindness of Strangers Julie Woestehoff

Should We Force Students to Learn? Or How Can we Change Schools to Engage Students? David Andrade

Slow Down and Take a Step Back Steven Anderson

So Close and Yet So Far Bill Ivey

The Passion Bug Is Spreading. Have You Ever Caught It? Kyle Pace

The Rule of Law Dave Britten

The Same Thing Over and Over Rick Hess

The Wait Is Over Sean Slade

The WHAT, WHY, and HOW of Education Reformation Chris Fritz

The World Becomes What You Teach: Transforming Our Education Systems to Graduate Solutionaries for a Better World Institute for Humane Education

There ain’t no right way to do wrong Sabrina So How Can We Do Right?

There is NO Magic Bullet; Superman Does Not Exist Zeb Bassoon

﻿Those That Inspire… Teach﻿ Cathy Brophy

To everything there is a season… except learning Jon Becker

We Stand Beside Them and Learn Ann Leaness

What #edcamp has to teach us about PD; A Letter to Administrators Dan Callahan

What I Want for Reform Michelle Baldwin

What I Want From My Union Tyler Rice

What Is Our Purpose? Bonitadee

What We Can Do—New Teachers Chris Lehmann

What you do speaks so loudly, I can’t hear what you are saying Cathleen Richardson

Whatever Happened to Promoting Student Ownership and Responsibility? Sabrina

Who is Responsible for Failing Schools and Students?  Everyone! David Andrde

Who Says Our Way Is The Right Way? Jeff Jarvis

Why I Left Teaching: A Personal Example for the Ed Reform Movement Emily Starr

Why Libraries are the Future of School Shullamuth

(added by David Loitz)  What an amazing day! Over 2,300 hits for Real Transformation in Education Reform! Keep the conversation going! 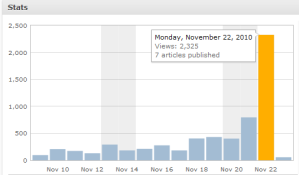 I can’t wait to see Monday’s collective voices blogging for positive educational reform.  Many blog posts have lamented the fact that educator voices are often left out of the conversations about the future of schools.  Many state that the future is here and we simply need to embrace it.  Others say we need to embrace contemporary tools to help our students learn in school as well as they do out of it.  Many see learning and schooling as not equitable, and some examine how we can better support student learning.  National organizations are urging us as educators to add our voices to the cacophony and use our passion, our expertise, our visionary leadership to forge the way and be heard as a united group advocating for positive reform for our students–for meaningful learning and for lasting understanding of growth needs for our educational system.

Original Post of You Want Ideas?  We Have Ideas! :

A blogging  challenge has been set forth for November 22, 2010, to blog for real educational reform.   Tom Whitby had also set forth one for October 17 and the blogs are listed here. Please share your ideas then add your blog link on November 22 to the comments here.  We’ll compile them into this blog so they will be accessible to all, just as Eric Macknight did for October 17.  Join us in sharing your vision, browse the list and come read the Co-op’s posts for even more!