you're reading...
Book and Film Reviews, Leadership and Activism

While US waits for Superman, kids in the world are drafted as failures

I posted this 3 months ago on my personal blog — My bin of thoughts. In a discussion with this group it came up that while quite a few posts have been written on the Cooperative Catalyst for Waiting for Superman, no one have yet posted anything about Schooling the World. I believe that this is a film that is equally, if not more important that Waiting for Superman — at least Sir Ken Robinson seemed to agree with me when replying back on Twitter after I brought it to his attention that it is “An important and fascinating movie.”

I hope posting it here will help bring the required attention among the educators and learning enthusiasts following our group! 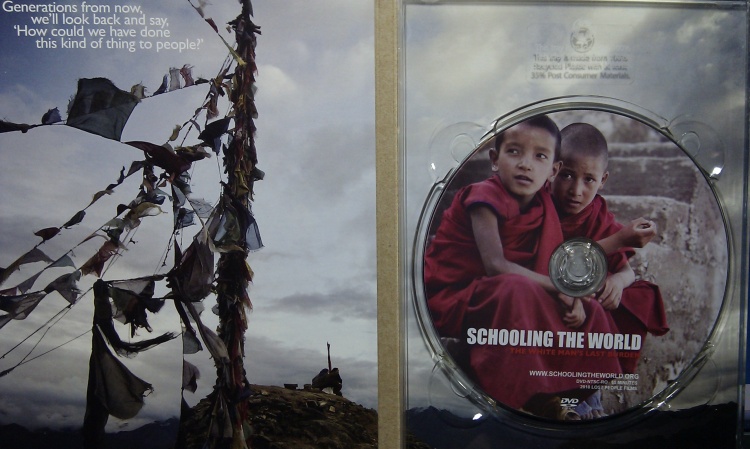 Today, I watched a profoundly disturbing film! It completely shattered my view of education as a progressive force in the world — even if the system in place is seriously outdated, I never really questioned the intrinsic value of education as a way out of poverty, as a way to move humanity into their future. Director Carol Black and the Lost People Films crew disillusioned me in the first 10 minutes of their fantastic film — Schooling the World: The White Man’s Last Burden — and I had trouble dealing with all of the mixed thoughts and emotions throughout the rest of the film!

Before this film, my understanding of the state of the education could be related to a story I heard long time ago from my parents.

A man was visiting a long time friend quite often for dinner and often his friend’s wife would cook fish for the occasion. Initially, he didn’t give much thought to the fact that the fish had its head and tail cut off. After a while, though, he noticed that the family never served a whole fish, so he decided to inquire the wife. “I never really gave too much thought to it — this is how my mom always cooked fish, so I continued to do the same,” she said.

This troubled the man so he asked if they can ask the wife’s mom? “This is how my mom taught me when I was a young girl,” she said “I always thought she must have had some reason for that!” Surprisingly, the old grandma was still alive, so the man, still troubled with the question why this family never ate the fish’s head and tail asked if he can be brought to the old lady.

“Honestly, I didn’t have any bigger pan in the house, so I would cut the tail and head to fit the fish inside for frying,” the granny said!

The current education system was devised during the start of the industrialization, more than 200 years ago. Its purpose was to create skilled workers that could take specialized jobs and work in the factories. Just like in the story, though, I thought what happened to the education system in more recent years was that a bigger frying pan is now available, but no one thought about stopping the practice of cutting the fish’s head and tail!

In the developed countries, most of the factories are gone, more people than ever work in services and a great level of innovation and creativity is required by most modern companies. However, the education system still produces people that can do specialized jobs — or worse, tries to generalize their knowledge to such a level that it is useless at that point. As Sir Ken Robinson has been pointing for some time now, schools kill creativity — and creativity is the very resource we need more to ensure a bright future of our kids!

Schooling the World has shown me that this view is limited in itself! In the developing countries — and even certain communities in developed countries like US — industrialization is still lagging or simply the way of life in the community doesn’t mesh well with the ideas brought by it. But the same aging education system is brought there by well-intentioned missionaries, aid workers and volunteers thinking they’re doing a great service to the indigenous people in those areas. No one questions the common sense that education is the way out of poverty. No one, that is, except Carol Black and the thinkers featured in Schooling the World!

If I would try to use the fish story as a metaphor to the eye-opening view this film has brought to me, it would go something like this:

Disturbed by what he learned from the old lady, the man was about to leave his friend’s house when the daughter just arrived. She was all excited about a great deed she just did as part of her school project. Her class was assigned to visit the slums in the poverty-stricken part of their city and find a way to help a family there for one day. Remembering the dinner recipes from her mom, the girl decided to buy a fish on the way there and offer it for dinner to a family with four kids. She was so happy for coming up with the idea, she also tried to explain to the wife there how to cut the head and tail before cooking it, as that is how her mom always does it!

The man felt a bit better, feeling silly about his questioning of the family around the fish, so he thanked them all for the great dinner and headed out to his car. On the way home, one of the streets was closed due to an accident, so he ended up driving trough the slums. He was quite surprised to see a pack of cats gathering around a big fish on the street. Looking closely, he noticed the fish was missing its head and tail! It was all great that the family was brought a fish to cook for dinner, but what they needed was a pan and a working oven to prepare it!

As Carol said in the introduction to the screening of Schooling the World at the Vancouver International Film Festival, the goal of the film is not to provide answers — in this case there are probably no right or wrong answers, just different ones — but rather to inspire questions. Sir Ken seemed to agree with that, when he tweeted to his followers “Take a quiet look at this movie and think about the questions it asks” after I brought it to his attention. (digression: I learned about the film by accident after a friend whom I met over the weekend during a child birthday party thought I would be interested in it — she had no idea how much I would indeed!)

Indeed, the film raises a lot of important questions. Just to give you an idea of some, take a look at this short clip about imposing English as the language of the world to kids in Ladakh, India, the main location where this film is shot. This is very disturbing to me — especially as I personally struggle around the questions how much should I help my own kids keep a bit of their own language and culture (Macedonian) as we’re trying to build our life in Canada!

I was lucky enough to be able to film the Q&A after the screening. I invite you to check the discussion at http://www.youtube.com/user/World4Children#p/c/8561575F4F78F9F4 — it is very engaging! Apologies in advance for the low quality of the audio and he moving camera from time to time! 😉

I want to end this article with a thought on my own:

Waiting for Superman is raising important questions around the public school system in the US — which can easily be extrapolated to many other countries in the developed world. This is stirring lots of debate among teachers, unions, policy makers, the media, etc., which is great! Unfortunately, Schooling the World teaches us that an education system imposed on a community is still a broken system that is drafting kids as failures. Carol has a personal story to share on this topic as part of the Q&A (you can jump to minute 4:15 below)!

My question, then, is: Why everyone is still blind to the truth that no policy or system can be successful if the people it is intended for — those that are supposed to benefit from it! — are excluded from the discussion how to shape it?

Organizer: http://tedxkidsbc.com. Father. Agent of change. I learn for a living. Curiosity is my passion. Writing is my dream. I believe in the value of social media as a way to meet new people and love double espresso as a way to feel warm with old friends ;-)
View all posts by kima »
« My TED Talk: The World Becomes What You Teach
“Race to Nowhere:” An Educational Horror Movie »

14 thoughts on “While US waits for Superman, kids in the world are drafted as failures”