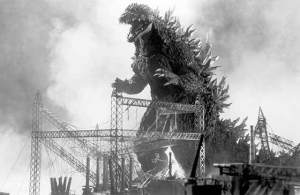 I am Godzilla! Hear me roar!

“We are bad Godzillas!”  I heard the familiar husky little voice of a 4-year-old student at my school while I was out working in the recess yard.  This boy, Vlad often exhibits a somewhat negative influence on the world around him, and is the source of many student complaints and staff hand-wringing.  His verbal warning here was clear: Vlad, and his little three-year-old protégé, Thomas, were bent on destruction.  They were out to terrorize and pillage the land.  During their roaring parade through the yard, I overheard one teacher warn, “it’s okay to pretend to be Godzillas, but not really hurt.”

“We’re not pretend!  We’re REAL!”  Vlad retorted.  Followed by, “You’re stupid!” and on they went.  This message also seemed pretty clear.  Vlad did not appreciate being seen as impotent.  He was powerful, strong, and pissed!  He had real feelings, real thoughts, and was to be taken seriously.

I later learned that this had already been a really rough morning for little Vlad.  In a few short hours he had escalated misbehavior from knocking down another boy’s block train to locking a girl inside the chicken coop to pushing a boy off the play structure.  And clearly, by the time he came into my awareness, he wasn’t through giving voice to and explicitly manifesting whatever turmoil he harbored in his heart, mind and belly on this day.

A brief word about the context here: our early childhood classroom could be accurately described as multi-aged, play-based and Reggio Emelia inspired.  There is a lot of space for kids to author their own learning.  There is also a lot of emphasis placed on social and emotional development.  Antisocial behavior such as Vlad was exhibiting that morning might typically have been initially dealt with in conversation: “How do you think it felt for Helen to be locked in the coop?  How would you feel?  Are you angry today? What words could you use? Etc.  It would also inevitably result in some limit-setting and then ultimately with the teachers reflecting on their own practice.  “What does this child need from me?”  I would hope this key question is one which all teachers are asking themselves regularly.

Anyway, not knowing any of the background from that morning, I was approached by these two bad Godzillas.  Meanwhile, I was fully engaged with my work:  Years ago on our play yard, I had built a hut with my older students based on an indigenous architecture from the Amazon.  It was a simple round wood frame around which we had planted “basket willows.”  Now, every winter the willows shoot many feet into the air, and students and I weave some of the shoots into the dome hut that has evolved.  We also prune the many extra shoots and stick them directly into the ground to root (Willow is an amazing plant!)  In this way, we can create new living forms and structures.  So that’s what I was doing.  This year I was re-planting new shoots, forming them into a long s-shaped crawling tunnel.  Older kids had come and gone stopping to help as they saw fit.  Then the Godzillas arrived and Vlad picked up a 10-foot shoot.  Trouble.

Despite this apparent recipe for disaster – volatile 4-yr-old armed with 10-foot pole, I assumed the best of intentions, not out of any well-planned pedagogy, but because I was authentically engaged and frankly busy.  The Godzillas paused and watched for a moment as I grunted and twisted, my hair tangled in branches, clippers working away, and then Vlad asked, “What are you doing?”

“I’m trying to make something.” And I kept working.  A minute or two later I realized Vlad was still there, the other Godzilla had wandered off.  “Here, Vlad, can you bring that stick over here?  I don’t know if you’ll be strong enough, but can you try to push that end into the ground somewhere along this line?”

“Well,  but…see… I am Godzilla…”  Yet he couldn’t resist, he tried his luck at this task and rose to the challenge.  Eventually, he got his stick to stand vertically in the earth.  “Is there another stick?”

“Yeah, there’s a whole pile over there.”

“Okay, I’m a bad Godzilla, but I still sometimes can help people.”

We worked together for twenty minutes.  Sometimes his work was truly helpful.  Sometimes it wasn’t quite up to snuff.  My communications with him were brief and direct, giving him advice or helping him to be more effective.  We were gathered around meaningful work, and the interactions were genuine and authentic.  And little Vlad thrived.  It wasn’t long before he 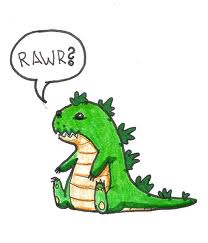 proclaimed “I am still Godzilla, but I am a good Godzilla and I help people when they need help.”  A few minutes later his mom came to pick him up and the little Godzilla proudly gave a tour of his work, escorting his mom through every inch of the tunnel we were creating.  He beamed (and mom was proud and relieved too.  I think pick-up time is often laden with teachers’ tales of misbehavior and is not a cherished moment for her.)

In this case, at least on this day, meaningful work and authentic engagement was exactly what this child needed, apparently.  I will be thinking for a long time about this little “success.”  Where do we go from here with little Vlad?  How do I follow up next week?  What implications are there for his schooling and for the program in general?  I certainly don’t believe this “problem” is “solved.”  Something is going on for Vlad that requires attention.  So was this afternoon a step in the right direction?  Does it offer us insight?  Or was it merely a momentary and welcome distraction?  I’d love to invite you all to share your thoughts.  What does this story bring up for you?

I am the founding Director of The Salmonberry School in Eastsound, WA. I have taught elementary school in public and private settings for the past 19 years. I serve as a contributing editor for Encounter: Education for Meaning and Social Justice (Formerly the Holistic Education Review.) I also serve on the faculty of the Self Design Graduate Institute. I hold an MA in EDU from Goddard College.
View all posts by Paul Freedman »
« The Evaluation: schooling at the end of teaching, unions, & care
#openschools: the Swartz dilemma »

15 thoughts on “Engaging with Godzilla”