Currently, public education is defined/financed/played-out/victimized via 500+ policies per district. If all i’s are dotted and all t’s crossed, according to those policies, the government/powers that be – grant you funding. (That comes from public taxes.)

If all i’s are not dotted and all t’s are not crossed, (a ginormous) part of potential funding/resources are spent on investigation of unmet policies.

Perhaps, we are focusing too much time/energy/people/resources on these policies/inspectors and the breaking/surveilling/maintaining of these policies.

Two policies in particular, feed into most other policies, because they initiate/perpetuate the system’s foundational idea/concept/policy of

Perhaps, in order to simplify the redefinition, we focus on just these two.

[Rather than the current mode of redefinition/reform/re-whatever, as seen when ie: a charter school seeks to break away from the 500+ policies. They are told/believed/forced to replace any policy they don’t want to abide by. Cementing the ridiculous number of policies. Which, perhaps, is the thing that keeps getting in the way, the mounds of policy itself.] 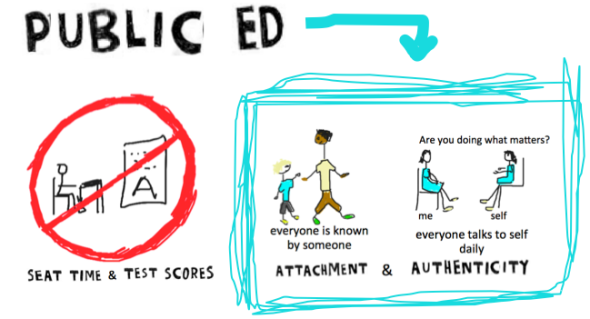 We propose, rather than drowning in the (often in-humane) data of seat time, and in the (often non-legit) data of test scores, we focus on two simple things that could turn our world upside down:

1. attachment – everyone  is meeting with a small group – everyday for 30-60 min

2. authenticity – everyone is talking to themselves – everyday

Now/then, public education would/will be defined/financed/played out via 2 policies per district.

1. everyone is known by someone

2. everyone talks to themselves everyday

…the government/powers that be – grant you funding. (That comes from public taxes.)

disclaimer – we believe this will sustain itself, if it is carried out in the city (eclectic ecosystem of people/resources), as the day (not tacked on to an already too busy day).